May 9 is Victory Day in Uzbekistan, celebrating the end of the "Great Patriotic Struggle" against Hitler. So I had a long weekend and decided to return to Bukhara for a couple of days. The flight from Tashkent took just over an hour in an old Soviet prop-jet. But since we loaded our own baggage into the compartment in the rear of the plane there was no need to wait at a carousel after arrival. I stayed at a five-room hotel where the owner had freshly plastered and painted the rooms in an old style This was my fourth trip, so I did not feel obliged to rush to various tourist hot spots. And Bukhara isn't that sort of city anyway. The old city is still a warren of tiny streets, many for pedestrians only, with people living in mud-brick homes that from the outside look much the same as they would have hundreds of years ago. There used to be a mosque for each day of the year in Bukhara. Many are now in ruins, but many mosques and medrassas still stand and give signs of the grandeur that Genghis Kahn found when he invaded. I enjoyed returning to some of my favorites and seeing a few new places.

One of my favorites is Chor Minor, a tiny mosque whose name means four minarets. Probably the most famous mosque is the 500 year old Kalon Mosque with its 900 year old minaret and an adjoining medrassa. Of course I climbed up the 47 meter minaret to admire the view one more time. One new attraction opened this month for Victory Day -- a memorial to the thousands of Bukhara residents who died during the War. There is a large statue at one end, flanked by pavilions with a dozen sets of brass pages listing all those who died. Each region of Bukhara has its own set of pages and my picture shows almost 500 names from one region (from O through R). Of course tourists need to see these attractions and other remnants of ancient Bukhara. And you can see more of them on my page chronicaling my first visit. Bukhara 2004. But tourists also enjoy hanging out at Labi Hauz, eating shashlik in the shade of the Mulberry trees planted in 1477, listening to traditional Uzbek music and watching dancers. Another required activity appears to be getting your picture taken by the statue of the "semi-mythical wise fool" or the more modern carved camels. 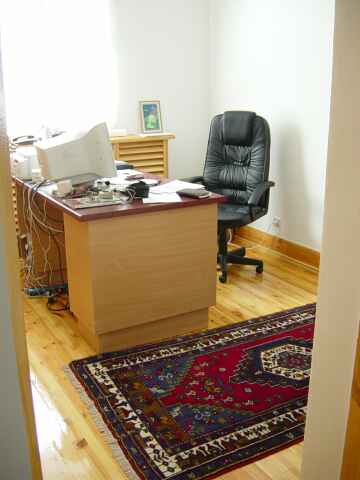 The other big attraction of Bukhara is shopping. There are several dome covered caravans where merchants gather to sell souvenirs and crafts. Many of the medrassas have also been taken over by craftsmen and merchants. There is a wide selection of carpets from throughout central Asia. Other favorites include miniature paintings, knives, jewelry musical instruments and hats. Most of the craftsmen and merchants are adults, but there were also boys and girls, usually selling with one of their parents. Anyone trying to make a living off the tourists has a problem -- the tourist season is short. Spring and fall are delightful, but the winter is cold and the summer much too hot to enjoy exploring winding streets. My hotel owner explained that when tourists came in the summer they had an early breakfast, visited sites for an hour or two then spent much of the day watching TV in their air conditioned rooms. I also enjoyed wandering out of the old town to visit the bazaar where modern Bukharans shop. If you know where to look you can probably find whatever you need. I bought some short-sleeved shirts I could wear to work now that the weather has gotten warm again and a pair of allegedly Polaroid sunglasses.

After buying the sunglasses the vendor explained to other customers that I was American so they asked me to take a family picture. I didn't argue.

As I headed back toward the old city, I came across a rather rickety looking steel tower. At one time there was an elevator, but now only a small circular staircase up the middle. I didn't much like the walk (up or down), especially when I had to squeeze by other climbers, but I did appreciate the view of the old fort called the Ark.

This year I've been traveling too much for work and not enough for fun. Having spent a couple of days acting like a tourist again I decided that I should set aside time for more explorations soon.


Back to Main Uzbekistan Index